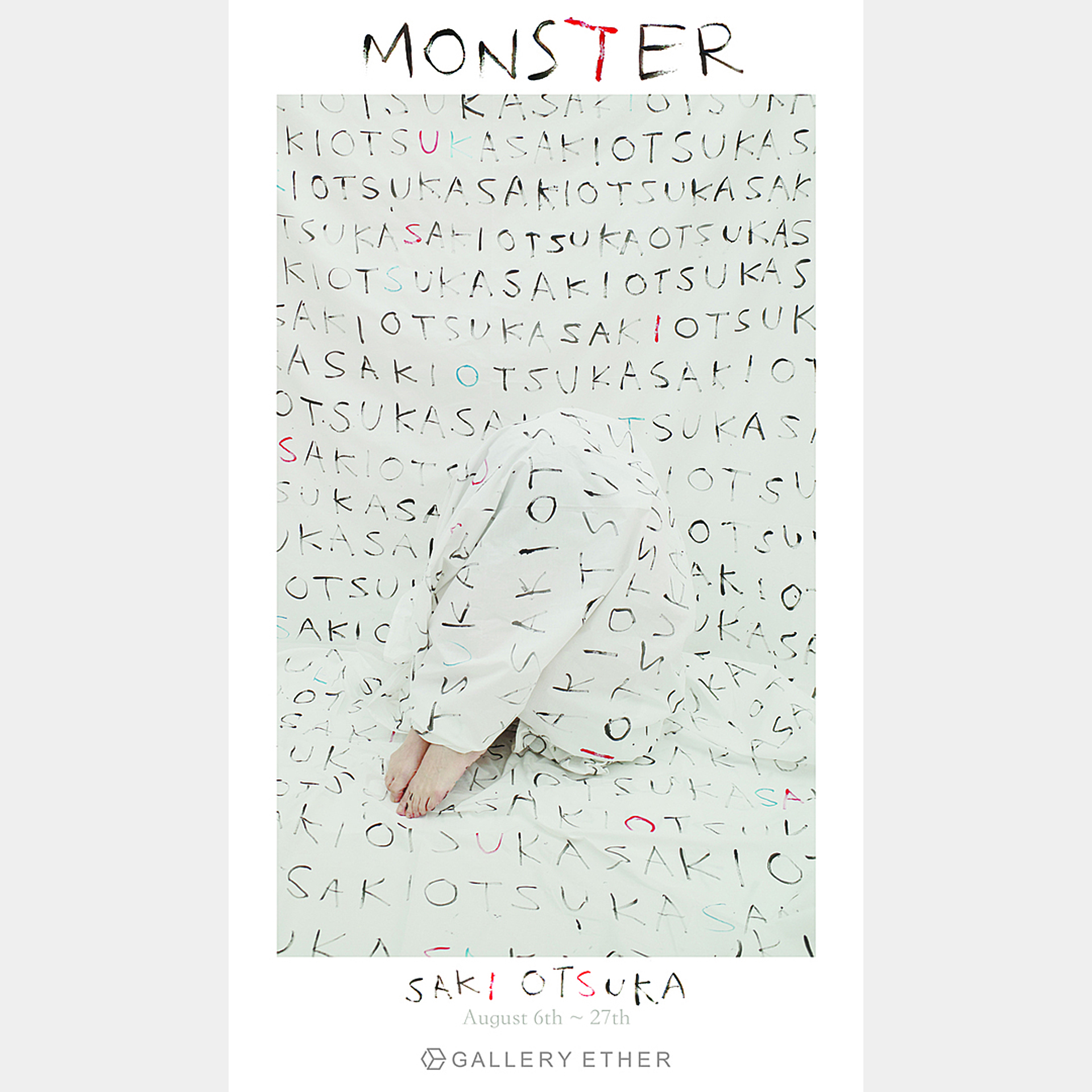 GALLERY ETHER is pleased to announce MONSTER, a new solo-exhibition of photographic, installation, and multi-media works with accompanying writing by Tokyo based multi-disciplinary artist SAKI OTSUKA, to be held from Saturday, August 6th to Saturday, August 27th.

﻿An opening reception will be held at GALLERY ETHER on Saturday, August 6th from 17:00 to 20:00. In addition, a limited edition catalog featuring the images and extended writings from the exhibition will be released for sale at this time, with a small edition being personally customized by the artist at the event at 18:00.

SAKI OTSUKA is a Tokyo native and multidisciplinary artist whose work is often focused around female themes and rooted in the belief that our lives are our own creations. In MONSTER, OTSUKA presents us with the continuation of three individual but interrelated series of works aimed at revealing and confronting the residual pains and stigmas of past traumas.

In the installation and embellished photo series of the same name, MONSTER, being continued now for the first time in 3 years, the artist presents us with a new installation and collection of “inner” self-portraits that examine the multiplicitous nature of the “self” and identity as they exists presently, within the echoes of the past.

In the ongoing Crows series, the artist delves into the thoughts and memories of her childhood, ruminating on the nature of necessity and survival, within and without the ever encroaching and selfish society of mankind.

Themes of trauma and the nature of mankind converge in Thorn Mountains, an ongoing series of photographs depicting stoic yet ominous landscapes in which the natural world is blighted by the “thorns” of human society, much as we are all blighted by the “invisible thorns” of our pasts.

SAKI OTSUKA has been shooting self-portraits, along with images of crows and “thorn mountains” for many years. This new solo-exhibition is centered around the artist’s own writings about these long ongoing series.

"MONSTER, Thorn Mountains, and Crows are all series that I have been shooting for a long time. My inner self-portrait series, MONSTER, now continued after three years. The crows and mountains come from old memories and childhood thoughts. This exhibition features not only photographs, but also paintings, drawings, and installation work with accompanying writings.”

"My work is made from the pain of past memories. The pains are like thorns that remain stuck in me. I remember these thorns in me. I need to write. To make invisible thorns visible is the power to erase the ambiguity from my existence."

There’s a monster inside me.

The monster and I are different creatures, not alter egos.

What we have in common is we both exist in “me” and share the same memories.

Memories are very important in the creation of personality. We share the same memories at the same time, but I don’t know if we have the same feelings.

I don’t think monsters have human-like feelings. The monster looks at my feelings and considers what it should do, then charges straight ahead.

There are times I feel, without regard for what will become of me, and even if I get into a more difficult situation, it can’t be helped.

The monster is too powerful and I lose. I’m used to losing and adapting to the will of the monster.

When the monster appears, I vanish and remain motionless.

There's a monster inside me.

The monster pushes and manipulates me. I can only listen passively.

We are companions in the same person, the same “me”, but the monster is so strong that I can’t stand up to it.

When the monster’s demands are too much, I ask it to stop, but it won’t listen

For the monster, my emotional memories are everything, and it seems indifferent to my current feelings. At any moment it might forcibly shove me onward. I’m dominated and walk in a trance. Gradually losing myself, I desperately walk on, just as I was told to do. When the monster dominates me, I feel I’m losing myself.

At one point, I lost myself altogether. I no longer existed within myself. There was only the monster.

The monster came looking for me. It searched for me frantically, but I wasn’t there.

I may have left myself somewhere.

I may have forgotten myself somewhere.

I may have abandoned myself somewhere.

Only the monster exists in me.

The monster is the only one who really knows “me” and keeps me going.

I may have been robbed of myself by the monster, or had no choice but to leave myself to it.

Maybe the monster hid me to protect me, and it’s been searching for me ever since.

There’s a monster inside me that “loves me”.

During the garbage crisis of the 1990’s in Japan there were regular TV reports about aggressive crows becoming more and more dangerous and ferocious. At that time, as an elementary school student, I was terribly shocked to hear the crows familiar to me suddenly being categorized with words like “harm”. On the TV, all the programs started making crows out to be the bad guys with headlines like “Troublesome Crows!”, “Crows Becoming a Nuisance!”, and “Crows Attack People!”. Footage of crows flying low to threaten people and kick at their heads was shown repeatedly, and people claimed in interviews how they were terrified and harmed. Of course, it’s natural to be scared if a crow does such a thing, but I was skeptical when I heard people claiming to be suddenly attacked without reason.

In those days there were no nets covering the trash awaiting pickup on the roadside, and crows swarming that trash was a daily scene. Most of the crows in Tokyo are large-billed crows, characterized by their thick beaks which look sturdy enough to crush anything. They can just as deftly tear into meat as into trash bags to get at the contents. This and their jet-black appearance caused people to become more and more afraid. Some people tried to kick the crows that scattered the trash, or to hit them with their umbrellas, and the crows counter-attacked by swooping on people’s heads and dropping pebbles on them. These situations were always reported with headlines like “Crows are Violent!” or “Crows Attack People”. The crows also have a breeding season in which they are very wary of their nests and newborn chicks being approached. During this season they tend towards anger when humans intrude on their space. Are the people who treat crows as villains not likewise the villains to crows? If we say they do harm, don’t we also?

Crows have always been companions to me. I’ve always thought of them as being the same as the cats, pigeons, spiders, and other animals sharing the city in harmony with each other. Then, suddenly, one day these crows are said to cause “harm”. It’s a terribly heart-wrenching thing. It was like only the crows were being excluded from the group. Crows are so intelligent, yet they’ve come to be known as scary, rumored to attack those who just look them in the eye. Though that’s not really the case, the images of crows threatening people on TV were enough to rouse people’s fears. At that time, the gap was growing between the crows and those friendly towards them I think. In the era when television was the key source of information, the television programs never blamed people for putting their trash on the street. They just made crows the bad guys.

I wondered if crows gave humans a bad impression simply by their appearance. Their black bodies become about a meter wide when they spread their wings, which can certainly seem intimidating. But you can’t just assume they’re bad. People are selfish. Crows aren’t attacking them, just posturing really, but people pretend they’re the victims because they’re scared. Even though the world is not just for humans they leave their trash outside, then hate crows for getting into it.

Fear of the unknown causes rejection. The pain that I felt when I was left out was the same as the hated crows, and I felt like I was one of them.

When I would travel from Tokyo to the rural town where my grandparents lived, I liked to watch the city scenery gradually disappear from the train or car. When the buildings disappear, and the urban atmosphere fades away, and the rice fields begin to appear, so do metal towers. I worried about how huge they were and how they affected the country landscape.

Suddenly, the metal towers looked like thorns stuck in the mountains.

Mountains are natural, and so they carry the original appearance of the Earth. However, these metal “thorns” were later stabbed into them by people.

To live, we destroy nature. Every time I see one of these “thorns”, I wonder why we can’t live another way.

I wonder, do mountains want to look like this? I wonder how I’d feel with a tower stuck in me.

The stabbed mountains sit in pain with their thorns, silently radiating their anger. 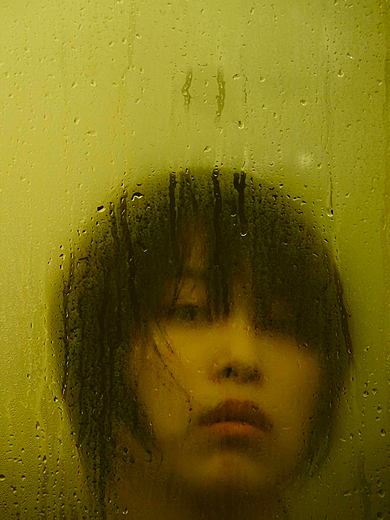 SAKI OTSUKA is a Tokyo native and multidisciplinary artist whose work often focuses on female themes, rooted in the belief that our lives are our own creations.

"Ever since that day when I was 15, I have lost myself.

Since that day, the nightmares I repeatedly have, the damage I’ve accumulated, and the wounds caused by words have become an enormous pain that remains in my heart.

I live my life with c-PTSD.

My paintings and photographs exist to show that “I am here” after having lost myself to sexual abuse.

I’ve been drawing and painting since my childhood. Images came into my mind one after another, and I wanted to become a painter. Now, to reflect the state of my mind, I make two different types of paintings: one is filled with details and small circles, the other is roughly spread ink and paint. Characteristically, the mood and style of my paintings varies with my mental state. The circles are me and proof that “I am here”. I draw them one by one in order to regain my lost self. The ink and paint that I work roughly and vigorously are me, the liberation of my suppressed self.

For me, I am a soul. To regain the soul I’ve lost, I paint and fill myself with new life

The feeling and knowing that “I am here” led me to these images that emanate from my past memories and trauma. Starting from self-portraits that traced my past and inner self, I have come to shoot a wide range of subjects, including women, male and female nudes, and landscapes.

The self-portrait works include “Sacrifice” and “Drowning”, which depict sexual abuse, “me”, a collage of me being trampled by men, “Decorate”, a series of painted photos created after realizing I was, in response to my trauma, avoiding having any kind of conspicuous appearance, and “MONSTER”, a self-portrait and installation series informed by my struggle with c-PTSD. My photographic work is still largely self-oriented. The difficulty of living for women is a burden I share, and I think that nudity reveals the wounds of sex and desire, at least, that’s the only reality I’ve ever seen.

My ongoing crow and mountain series express the pain of my childhood, and I believe them to be linked to the misunderstanding of sexual abuse victims and their anger.